Donate to help WE ARE KINGS get distribution!

RENT OR BUY THE MOVIE 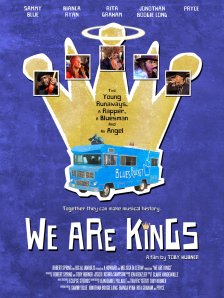 We Are Kings is an independent feature film about life, triumph over adversity, multi-generation and racial relationships, and never giving, wonderfully told in a road movie musical that will carry viewers on a joyful, triumphant journey, soothe their souls, and warm their hearts. Written and directed by Toby Hubner, the worldwide premiere is set for Friday, September 19, 2014 at Hollywood’s Arena Cinema,  1625 North Las Palmas Avenue, Los Angeles, CA (www.arenascreen.com).  The film will be distributed by Indie Rights/Nelson Madison Films (www.indierights.com).

The lead roles were cast with real musicians and almost all of the music in the film was written and recorded, on location, and performed by the musicians in the film. The exceptional original music is a big part of the story, starring multifaceted blues man Sammy Blue, Atlanta’s “Crown Prince of the Blues” (also Hottrax recording artist, “A Blues Odyssey”; and featured in Clint Eastwood’s Trouble with the Curve).

We Are Kings is the story of a down and out blues man, I.B. King, trying to save his  blues bar and his deathly ill wife, Lilly, played by legendary diva and former Raelette Rita Graham, whose album Rita Graham Vibrations was produced by Ray Charles. I.B. hits the road for Chicago to somehow bail it all out with a record deal in his Blues Bucket, a sun-blasted 1973 Winnebago painted blue.

True to the blues, the would-be record deal falls through and I.B. has no gigs, is penniless and hopeless with Lilly in the hospital dying.  Then, he finds himself lying in the middle of a frozen road one night, about to die, when he is visited by life-changing forces.

Lilly’s spirit leaves her body and descends upon I.B. to convince him that life is worth living. Then, magically, she guides two young, homeless, hard rock musicians – Layla Knuckles (played by Bianca Ryan, America’s Got Talent’s first-ever winner) and Dustin Ladue (played by Jonathon Boogie Long, blues phenom and “King of the Blues” winner in Guitar Center’s national competition, as well as opening act at age 23 for BB King) – to stumble across his near frozen body and drag him back inside the Blues Bucket.

A couple of hundred miles down the road they pick up a young runaway – Sam the Rapper (played by Pryce Watkins aka Pryce, RCA/Sony recording artist with a unique, endearing rap style) – and the rest is history, as they gig from town to town and one of the most unique and strangest videos viralizes online about a band from nowhere and a ghost, all heading south in a bucket of bolts called the Blues Bucket.

Against all odds, these disparate souls come together, and triumph. Whether they know it or not, they need each other, and they find each other – first through their music – and ultimately through relationships that are enriched by the kinds of experiences only a hard-knocks road trip and music can generate.

We Are Kings is filled with good humor and celebrates real life. It tells a story that will resonate with a broad audience,  an audience that may not yet know how powerful and moving blues music can be, until they see it, hear it, and feel it.

We Are Kings has been certified by the Dove Foundation for family appropriate viewing by 12-year-olds and older.

We Are Kings Project Links:

RENT OR BUY THE MOVIE

Rated NR · 90 min. · 2014
We Are Kings is that rare thing: a film about musicians where you actually look forward to the next song. Mississippi bluesman I.B. King (Sammy Blue) is struggling to get from Chicago to Mississippi, where his bar is about to be auctioned off by the bank, and where his wife, Lilly (Rita Graham), a legendary blues singer, has fallen ill. On the long ride home, I.B. finds himself taking on, one after another, three young musicians, whose respective musical talents inspire the old master to find a new sound.Shooting on location in the South, writer-director Toby Hubner displays a light comic touch and a gift for melding character and landscape, especially in sequences where the band puts on parking-lot concerts to raise cash. As the three vagabonds who end up in I.B.’s ratty old Winnebago, singer Bianca Ryan, guitarist Boogie Long, and the rapper Pryce each gets a solo number, and are so bursting with talent that it’s impossible to pick a favorite. This movie is only 75 minutes long, so it’s too bad that Hubner rushes the finale — too much triumph, too little emotion — but when the grooves are this rich, all is forgiven. By Chuck Wilson
Director: Toby Hubner
Writer: Toby Hubner
Cast: Bianca Ryan, Sammy Blue and Pryce D. Watkins

We Are Kings Ticket Sales for Arena Cinema: